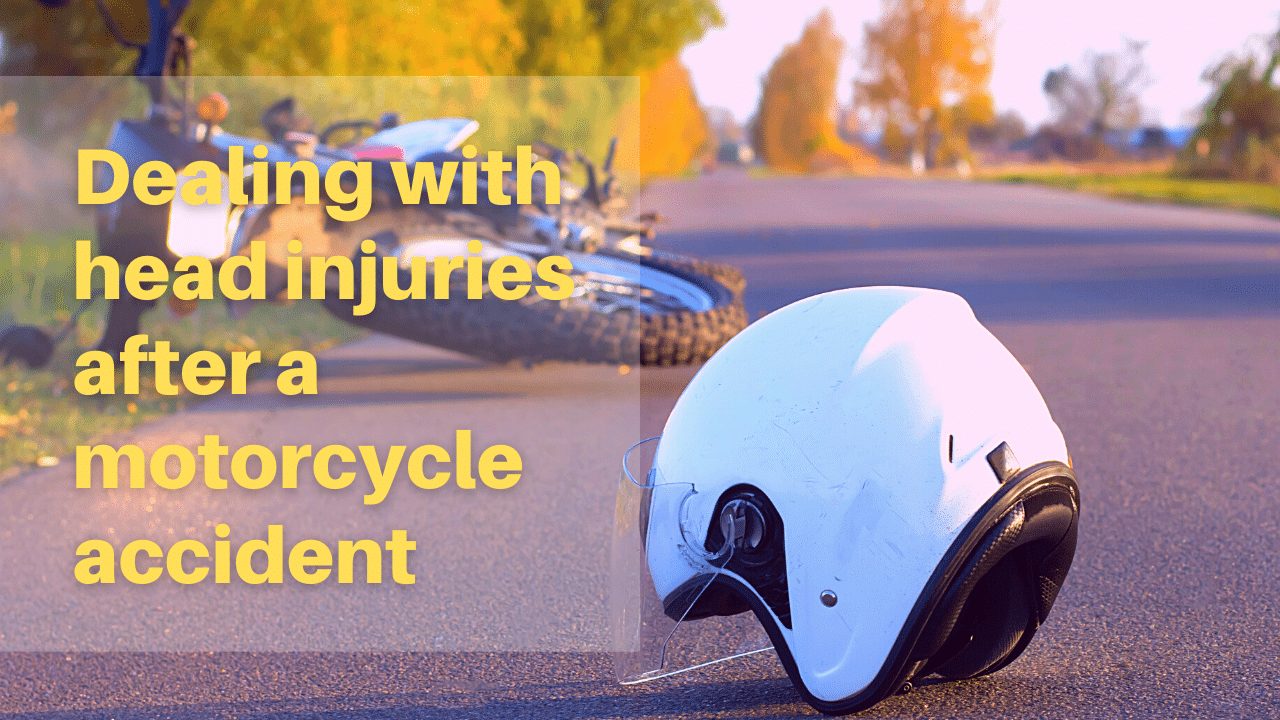 Motorcycle accidents are often catastrophic, with the victims suffering from severe injuries, or worse, succumbing to death. Of all the serious injuries a rider can sustain, brain injuries are the most common and the leading cause of fatalities in majority of these accidents.

Helmet use can help lessen the impact to the head in the unfortunate event that a rider is involved in a crash. However, it does not guarantee that the victim will not suffer from any head injuries at all.

Whether the head injury from a motorcycle accident is life-threatening or not, it is important to take it seriously before worse comes to worst.

How does a head injury from a motorcycle accident happen?

Unlike other parts of the body, the brain does not have the same regenerative capacity. This means that if the neurons inside the brain are damaged, they are often permanent. In a motorcycle accident, a traumatic brain injury can occur when:

The risk of sustaining traumatic brain injuries from motorcycle accidents is not entirely surprising given a motorcycle’s lack of protection and safety features. This is why it is important that an injured rider be taken to the nearest medical facility to be evaluated for a head injury following a motorcycle accident.

In some cases however, the signs of a head injury may not manifest until weeks, or even months, later.

Because a traumatic brain injury involves damage to the brain tissue itself, the symptoms may vary depending on the location of the brain that has been damaged. However, there are a few symptoms common to the different types of brain injuries. These include:

If a traumatic brain injury is not evaluated as soon as possible, these symptoms could progress and might lead to death.

According to the National Highway Traffic and Safety Administration (NHTSA), motorcycle riders are 26 times more likely to be killed in an accident than drivers of any other four-wheeled vehicle. In most of these cases, the cause of death is a traumatic brain injury. This has many different types, but some of the most common include:

Many people think that concussions are only a minor head injury, but this can actually lead to a loss of consciousness, chronic headaches, and may even have lasting damage to the brain.

Cerebral contusions are bruises on the brain which are usually caused by a direct, strong blow to the head.

An epidural hematoma is a bleeding between the inside of the skull and the outer covering of the brain. In the event that a motorcycle rider involved in an accident falls from his vehicle and strikes the side of his head, the middle meningeal artery is torn which causes the bleeding.

A subdural hematoma is a rupture of multiple blood vessels inside the brain, making it one of the most serious traumatic brain injuries. This usually happens when a motorcycle rider is ejected from the vehicle with tremendous force and badly hits his head in a hard surface, giving the brain severe trauma.

What to expect after sustaining a head injury

Head injuries, especially the more severe ones, often entail serious and long-lasting complications. These include:

The brain processes motor and sensory signals from all over the body. If the brain has been damaged, it will have trouble processing these signals correctly and could interpret them as pain, which can be difficult for recovering victims to deal with.

Dementia is not a specific disease but a general term for the inability to remember, think, or make decisions that enable everyday activities. The most common type of dementia is Alzheimer’s disease. Aside from memory issues, people with dementia also lose the ability to perform day-to-day tasks as a result of damage to the brain.

Why helmets are important

Many studies conducted over the years have shown that motorcycles can significantly reduce the risk of sustaining head injuries in a motorcycle accident. In a study published by the Journal of Epidemiology, it was found that:

Aside from the physical and emotional suffering, a motorcycle accident victim and his family are also bound to face significant financial challenges. According to the NHTSA, severe but non-fatal injuries can cost victims and their families millions of dollars in economic and general damages.

After a motorcycle accident, an injured rider who might be suffering from severe head injuries will always need emergency medical care. This will require hospitalization, and the more severe the injuries are, the likelier it is for the victim to stay longer in an intensive care unit.

Even if the victim is covered by an insurance provider that can shoulder some of the costs, it rarely covers all of it. These hospital bills can quickly accumulate and reach hundred of dollars or more, and that is just from the immediate aftermath of the motorcycle accident.

Once the victim is out of the hospital, recovery may be even more costly because it can involve long-term treatments such as physical, emotional, and occupational therapies. The victim may also need assistive devices and technologies to help them get around and to communicate with others.

While these are all done for the victim’s recovery, these therapies and equipment will undeniably require a great deal of money.

It is common for victims in recovery, especially those suffering from head injuries, to not be able to work for a long time following the accident. Their family members usually miss work as well to help take care of their loved ones. With the loss of regular income, the chances of the entire family struggling financially increase dramatically.

The financial burden may have significant impact to the future as well. Not only do victims who sustained head injuries miss work, but their ability to effectively perform their job is significantly diminished as well. The worst that could happen is that they may not be able to return to work at all.

For those who were able to go back, the amount of time they spend working and the nature of tasks they perform have been reduced due to the effects of the injuries. Moreover, head injuries also cause fatigue that limits hours at work and interferes with complex decision-making required in the job.

A severe head injury can drastically change a person by affecting how he feels about, perceives, and responds to others. Those changes are often deeply frustrating for the victim, and can cause immense strain on family members and friends.

Aside from the harm caused by severe head injuries to relationships, brain injuries also hinder victims from engaging in activities they used to enjoy. Some victims may not even be able to ride a motorcycle anymore, play sports, or engage in other hobbies.

As a result of this limited ability to do anything, victims are likely to fall into a deep depression and even become suicidal because of the drastic turn of events and lifestyle changes the motorcycle accident has brought about.

What is lane splitting and how dangerous is it?