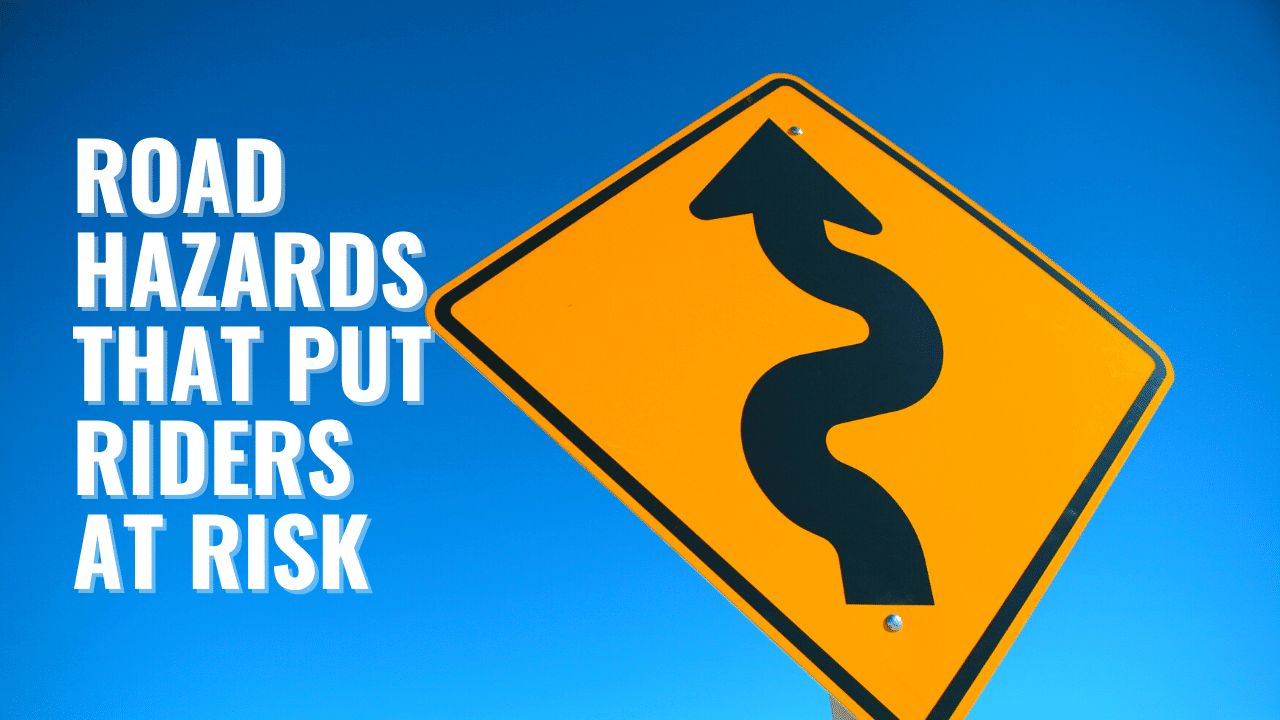 Motorcycles can be fun to ride, but one sweet trip can instantly turn catastrophic if road hazards get in the way. While accidents will always be unpredictable, a motorcycle rider should always look out for potential road hazards that could jeopardize his safety and take necessary measures to avoid them.

Road hazards to watch out for

Dangers on the road are not exclusive to motorcycle riders, but what might seem like a minor hazard to regular car drivers could mean life or death for those on a big bike. Because a motorcycle does not give enough protection to its rider and is not equipped with adequate safety measures, accidents involving them often have fatal outcomes.

With that in mind, being aware of the different hazards on the road is one way of ensuring a safe and smooth ride.

Debris on the road

Debris such as tree branches, rocks, or a pile of leaves can be dangerous because they can either cause a crash or become airborne and strike the rider.

Regardless of whatever road debris a rider is faced with, identifying whether it is bulky or not is the first thing a rider should do. For objects that are not bulky, like plastic bags or small tree branches, most motorcycle types should be able to overcome them easily.

However, for bulkier debris like large rocks blocking the road, avoiding them is the only option. Be careful when steering away from them though, because in the process of doing so, you might also disrupt traffic and be a hazard yourself.

Hydroplaning is one of the biggest risks of wet roads. It is when water pressure in front of the tire pushes the water under it, resulting in the tire being separated from the surface of the road by a thin film of water.

This could lead to loss of steering, braking, or power control. However, hydroplaning becomes even more dangerous when there is oil residue on a wet road. Motorcycles are more at risk than cars and other four-wheeled vehicles because they have fewer tires that make them less stable.

When riding on a wet surface, always brake with caution. Abruptly reducing speed can make a rider lose traction and control of the motorcycle.

Another road hazard that can make a rider lose traction is gravel. When a motorcycle loses control because of this, the vehicle is likely to slide out from under the rider. This risk is even more exacerbated on sharp turns where a rider has to shift his body weight to navigate around the curve.

To avoid this, a rider should minimize the lean of his motorcycle and refrain from braking, accelerating, or swerving too fast. The rider should also maintain a consistent speed when riding through gravel territory.

Expansion joints, typically found on bridges and overpasses, connect sections of a road and allow it to expand without cracking. However, these joints also create gaps in the road where motorcycle tires can get stuck.

Motorcycle accidents are also likely if the surface around the expansion joint is in bad condition or becomes slick due to the combination of wet surface and oil residue.

To prevent this from happening, a motorcycle rider should maintain consistent speed and keep the tires in a straight, perpendicular line until the motorcycle has gone over the joint.

An oil spill can also make a rider lose control of his motorcycle once the tires slip and slid over the oil. However, it is quite easy to spot and should be easily avoidable if the rider knows what an oil spill looks like on the road. A dark spot on the road that looks wet despite a sunny day? Chances are that is an oil spill. Rainbow on the road during a rainy day? Also likely an oil spill.

However, oil can be a lot trickier to navigate through than other road hazards because it is slippery, so keeping traction over it will be more challenging.

Oil spills are generally avoidable, but in cases where it is impossible to do so, keeping a consistent speed when riding over one is crucial. Once you have gone over the oil, remain cautious and continue riding carefully because there might still be some oil residue on the tires. Only return to your normal riding pace after a few hundred meters.

Animals should not be passing through on the highway, but there are instances where they need to. When a motorcycle rider encounters such a scenario, the typical course of action is to reduce speed and maneuver around them.

However, a rider may also put himself at risk and become a hazard in the process if he swerves carelessly in an attempt to avoid the animals. To avoid this, always check the mirrors and the motorcycle’s blind spot before proceeding. This is because other vehicles may not be able to brake or swerve as quickly, and the animal may not be visible to other drivers.

As a general rule, motorcycle riders should travel at a speed that gives them enough time to safely react to whatever is in front of them, whether it is other cars, debris, or animals.

Another road hazard that affects tire traction is a manhole cover on the road. Its effect on a motorcycle’s tires will be similar to oil spills, so a rider’s course of action should be similar to how oil spills are dealt with: by reducing the amount of load on the tires.

Many riders successfully avoid these hazards, but in some cases, riders become hazards themselves when they brake or swerve too fast. This should not be the case because manhole covers are the easiest to deal with out of all the other hazards on the road.

When going over these kinds of hazards, following the same protocol as with gravel should be enough. Just remain loose on the bars, keep the lower body firm on the seat, and maintain s steady throttle as you go over a manhole cover.

If turning corners, the course of action should still be the same. However, the weather may play a role in how a rider is going to deal with a manhole cover. If the road is dry, simply lean out of the corner and stand the motorcycle up then rider over the cover at a slow but consistent speed.

However, it is best to deal with manhole covers like you would an oil spill when it is raining: avoid the hazard if it is safe to do so. Regardless of the circumstances, a rider should always be mindful not to be a hazard to other motorists on the road.

Potholes are an alarming cause of accidents for both motorcycle riders and four-wheeled vehicle drivers. The most common potholes are those smaller cracks on the road which are typically shallow and only about two inches deep. If you encounter this kind of pothole, you should not be too concerned. Just remain loose on the handlebars, use your legs to steady yourself on the motorcycle, and guide the motorcycle over it.

However, if you are headed towards a larger pothole that is more than six inches in diameter and more than two inches deep, maneuvering around it would be the best course of action to avoid any damage to your motorcycle. This is to steer clear of the hazard as much as possible without disrupting the flow of traffic since you can easily become the hazard if you fail to do so.

If the situation does not permit you to maneuver around the pothole, the next best solution is to gradually reduce speed and ride over the pothole slowly. To succeed in this, find the shallowest part of the pothole so that it would be easier to ride over.

Who can be held liable for road hazards?

If a motorcycle accident is caused by a road hazard, the injured rider can pursue a personal injury claim against the city, county, or state agency responsible for maintaining the road.

However, a notice of claim must be filed first with the appropriate government agency within six months from the date of the accident before a lawsuit is put forward. Moreover, having a valid claim also requires the victim to present proof that the party being sued is aware, or should have been aware, of the hazard but failed—deliberately or not—to take the necessary corrective measures.

The Cost of Motorcycle Accident Injuries