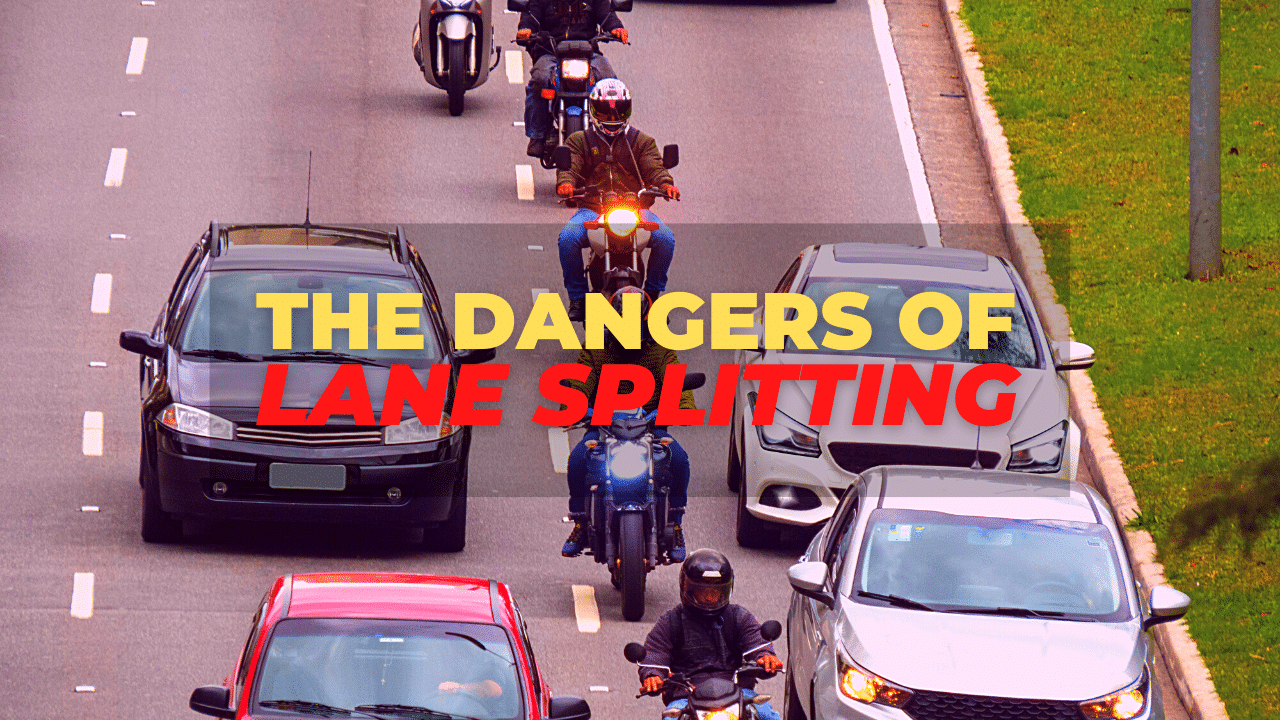 Riding a motorcycle in slow or unmoving traffic can be frustrating, which is why some motorcycle riders tend to take advantage of their smaller vehicles and weave in and out of cars to keep moving forward.

But while such maneuver may seem convenient, this practice could come at the cost of either your life or other people’s lives. With the inherent risks that come with riding motorcycles, is it really worth adding more danger to this already dangerous activity?

What is lane splitting?

Lane splitting is when a motorcycle rider drives between two cars on a multi-lane road to pass another vehicle and maneuver beside them in the same lane.

While this can help you avoid a traffic jam, lane splitting is dangerous because of the limited space between you and other cars that can make you even less visible to other drivers, especially if you end up in their blind spot. Lane splitting will also make it difficult for you to brake and avoid a crash if another car decides to suddenly switch lanes.

Why do riders split lanes?

There are several reasons why a motorcycle rider decides to split lanes. These include: 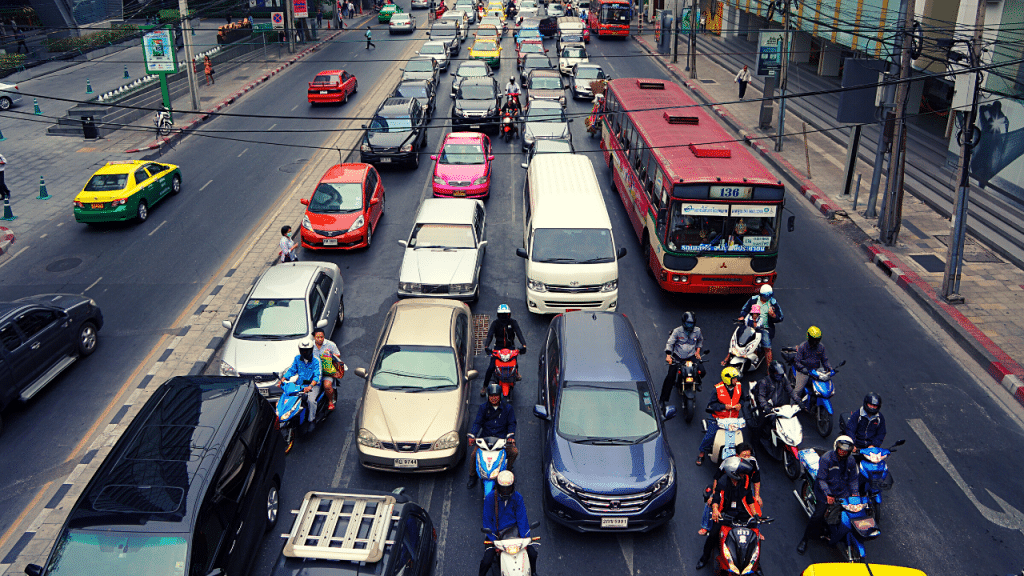 • About to be late for something

If you are about to be late for an appointment and you get stuck in traffic, you will try to weave in and out of cars to keep going and hopefully get to your destination on time.

If you do not like wasting your time stuck in a traffic jam, you may be tempted to move through rows of traffic instead of waiting for the cars to clear.

• Riding under the influence

If you are drunk or high on drugs while riding a motorcycle, you have a reduced level of judgment that could lead to poor decisions like making the dangerous move of moving between lanes of traffic.

Sometimes, you might think that you already have the right skills when it comes to riding a motorcycle even though the truth is you still have a lot to learn. This thinking could lead you to believe that you can easily squeeze between vehicles.

However, even the slightest miscalculation and error in judgment could put your life and other people’s lives in danger should you lose control of your motorcycle.

But lane splitting becomes even more dangerous when traffic is moving at normal speeds. This is because of the following reasons: 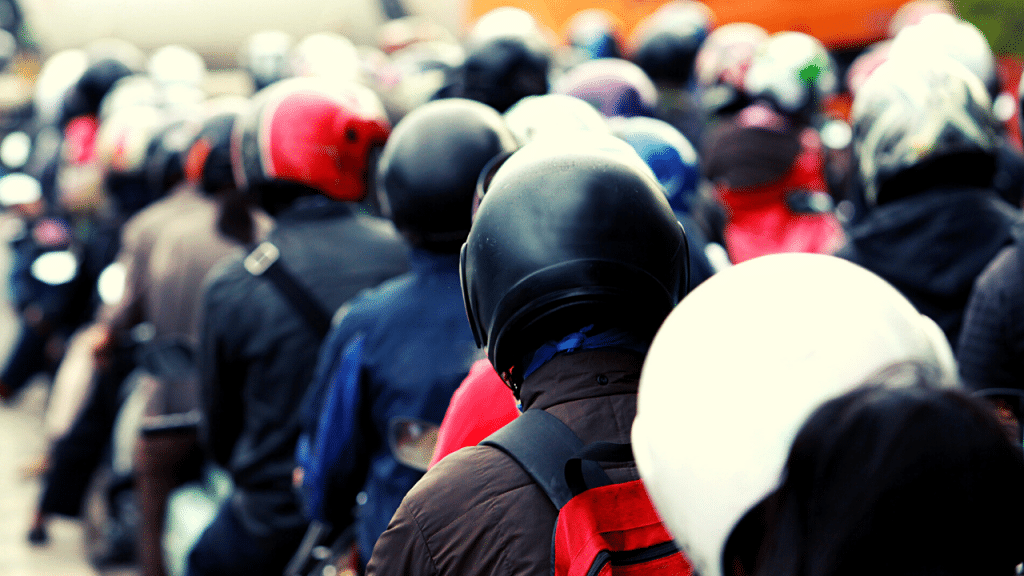 Regular car drivers typically do not anticipate a motorcycle rider to be traveling between lanes of traffic. If a driver wants to change lanes, he or she may not see the motorcycle rider until the last second. This can cause the driver to collide with other cars and potentially begin an accident involving multiple vehicles.

When you are lane splitting, a sideswipe accident is also another possibility because you are traveling very close to other vehicles. This risk is even more exacerbated if you are in the driver’s blind spot. 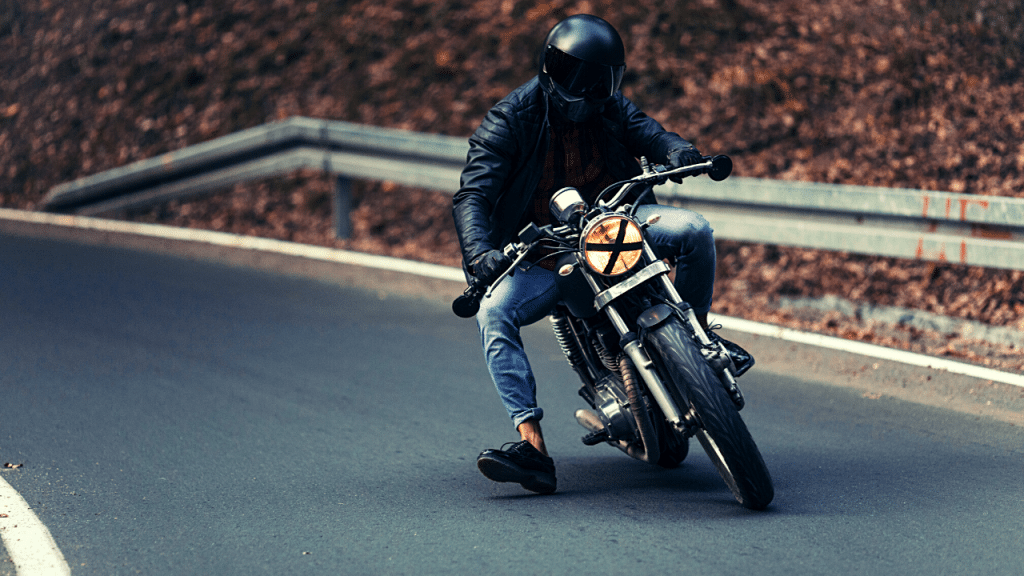 A driver who sees the motorcycle rider splitting lanes at the last minute may instinctively slam on the brakes that could cause a rear-end accident. It is quite normal for drivers to react this way, especially when they see a motorcycle rider in the rearview mirror coming up between cars or if the rider suddenly flashes his lights.

Honking is usually a good warning to other drivers. However, honking and the loud noise of a motorcycle engine can also startle a driver and cause him to collide with other vehicles. 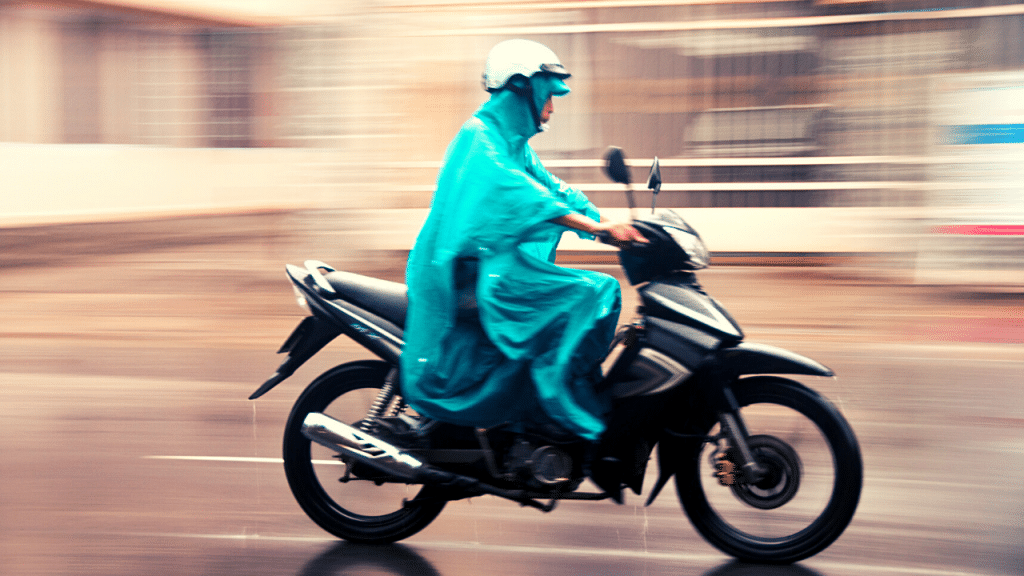 You are likely to lose control of your vehicle while lane splitting when you are doing it in bad weather. But aside from wet roads, road hazards can also pose a threat.

Debris, expansion joints, and oil spills could further increase the risk of lane splitting. Moreover, road surfaces are often uneven, have irregular bumps, and have manhole covers or potholes that may not be visible until it is too late.

If you encounter any of these road hazards and lose control, you could easily swerve in front of or into another car.

Who is liable for accidents caused by lane splitting? 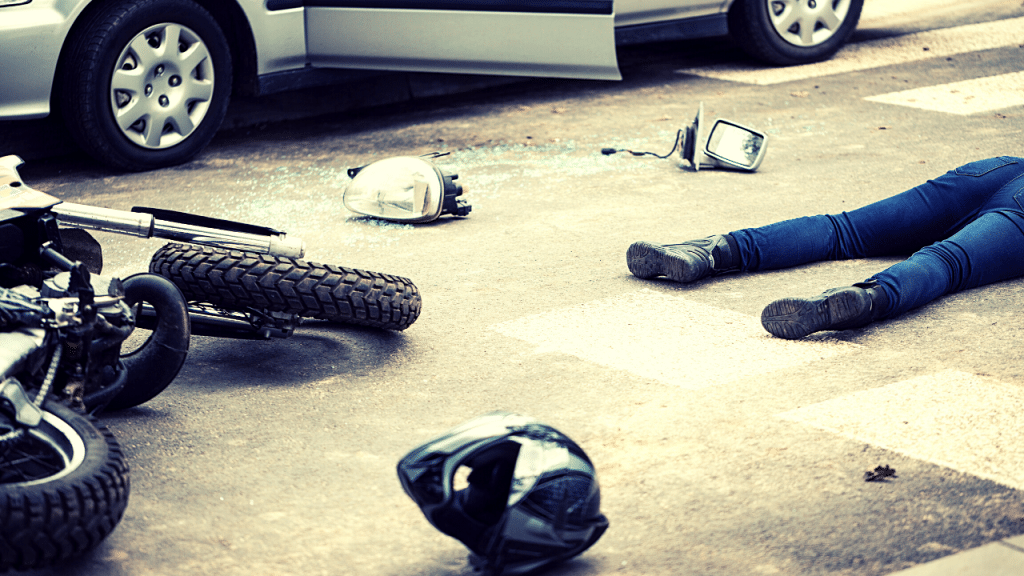 Motorcycle riders who lane split are more prone to accidents because of their proximity to other vehicles, the reduced space to maneuver, and the fact that car drivers do not anticipate another motorist to pass between them in slowed or stopped traffic.

If an accident is caused by lane splitting, most of the time it is likely the fault of the motorcycle rider. Should the insurance company or court discover that the rider’s recklessness was a substantial cause of the accident, the rider is unlikely to receive any compensation.

However, if the motorcycle rider can prove that it is the other driver’s fault, there could be partial or full compensation for the injuries sustained and damages incurred. This could be the case if the other vehicle involved hit the rider while carelessly changing lanes, or if the driver was distracted behind the wheel.

Sometimes, the fault is also determined depending on whether lane splitting is allowed in the state where the accident happened. 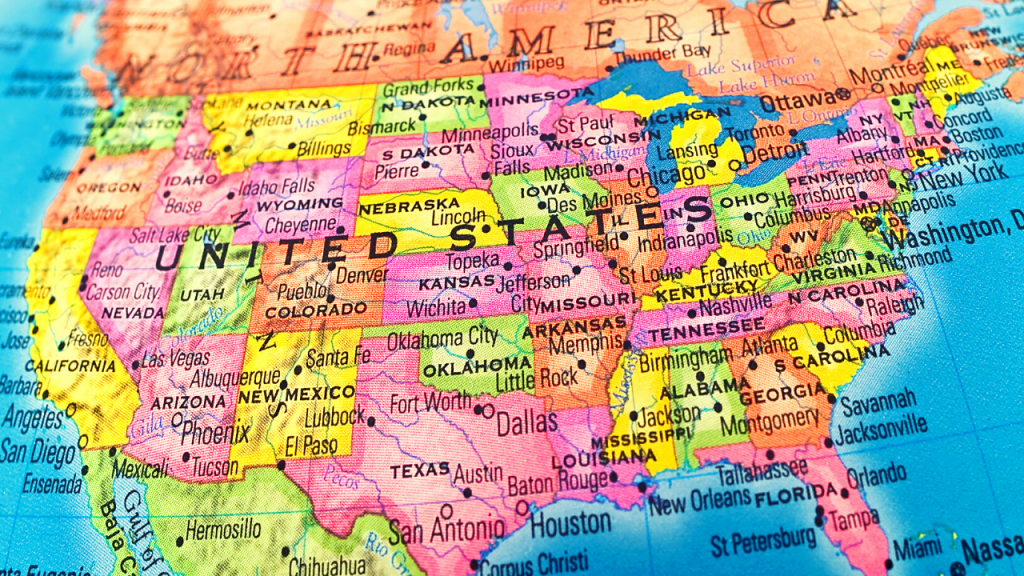 Most states do not consider lane splitting legal but they also do not explicitly say it is prohibited. However, police and the courts often recognize lane splitting as against the law.

In California, the only state that has a law regarding lane splitting, this maneuver is allowed but only if it is done in a “safe and prudent manner.” However, this is still subject to the interpretation of the respective authorities since “safe” and “prudent” are not exactly defined.

While California is the only state where lane splitting is legal, Utah and Hawaii have legalized the modified versions of their respective legislations regarding lane splitting. In 31 states, lane splitting remains illegal.

In these states, the decision to charge a motorcycle rider who is caught lane splitting lies in the hands of the police officer who witnessed it, assuming there is one.

Four states—Washington, Oregon, Maryland, and Connecticut—are considering legislation regarding lane splitting. However, while these states have proposed bills on the subject, they are yet to be approved. 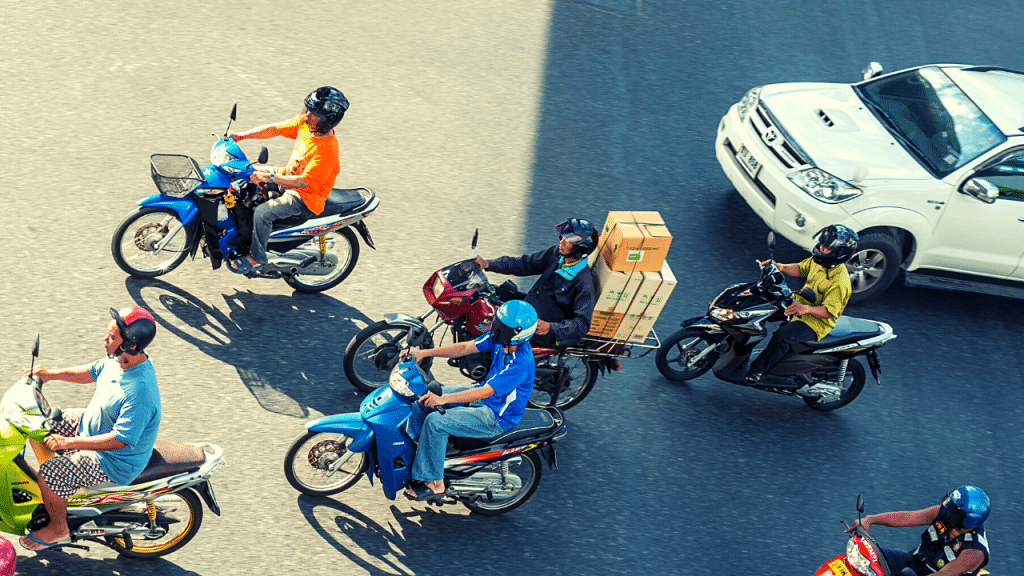 Lane splitting proponents, such as the American Motorcyclists Association (AMA), believe that when done correctly, lane splitting can be safe.

Lane splitting advocates also argue that when vehicles move slowly in a stop-and-go pattern, or if drivers are distracted and inattentive of other motorists and their surroundings, the result is congested traffic that poses a major threat to motorcycle riders who follow behind cars.

However, people who are against lane splitting, particularly the police and safety organizations, disagree with the lane splitting advocates. For them, it is simple: motorcycle riders put themselves and all the drivers around them at risk every time they attempt to split lanes.

Steps To Take After a Motorcycle Accident

The importance of safety recalls in preventing motorcycle accidents