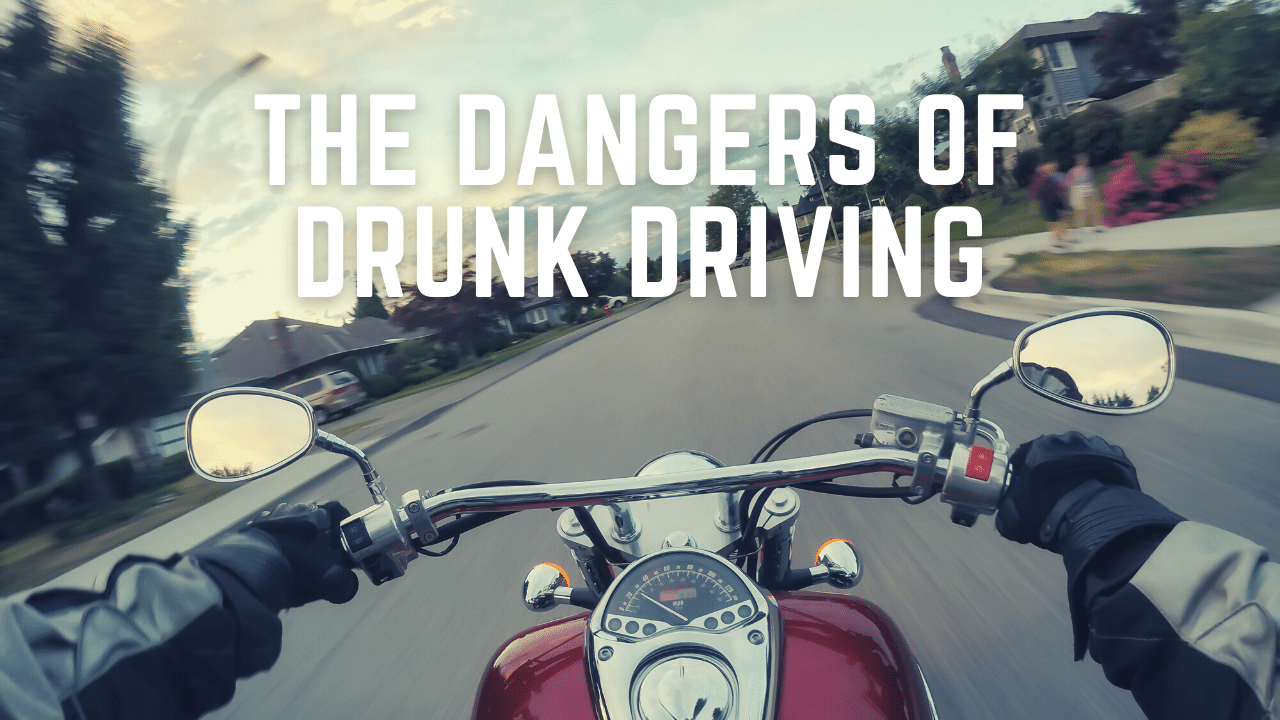 Riding a motorcycle under the influence is always a bad decision. But more than that, it is risky behavior that can lead to catastrophic results and unnecessary loss of life.

Aside from these risks, drunk driving can also cost you your relationship with family and friends, make you lose employment opportunities, leave you in a financially difficult situation, subject you to high insurance rates, and even possibly send you to jail.

So before you take that glass of beer and get carried away, ask yourself: is it worth it?

What does driving under the influence mean?

Drinking under the influence (DUI)—also called driving while intoxicated (DWI)—involves operating any vehicle, motorcycles included, while having a blood alcohol content (BAC) level of more than 0.08%.

However, you do not need to reach a BAC of 0.08% before riding becomes dangerous because even a small amount of alcohol can lead to harmful situations. It may not even be obvious for some riders that they are drunk because of their high tolerance for alcohol, but that does not mean riding would be any less dangerous.

Riding a motorcycle while intoxicated will always be a recipe for disaster and should be avoided at all costs.

What does alcohol do to the body?

Alcohol is a substance that diminishes brain function, thereby weakening thinking, reasoning, and muscle coordination—all of which are abilities crucial when riding a motorcycle. It also acts as a depressant for the central nervous system depressant which means that different bodily functions slow down once it is consumed.

In simple words, alcohol can negatively impact the body, so increasing its amount in the circulatory system may further amplify these negative effects.

As the alcohol level increases in the body, its negative effects on the central nervous system increase as well. When a person consumes alcohol, it takes about 30 minutes to two hours for it to be absorbed into the bloodstream. Once it is in the body, the alcohol then goes directly through the walls of the stomach and small intestine then passes into the bloodstream where it accumulates until it is metabolized by the liver.

Once the body accumulates 0.08 grams of alcohol per deciliter (g/dL) of blood, the likelihood of a rider being involved in a crash significantly increases. Because of this risk, operating a vehicle while having a BAC of 0.08% or higher is illegal in most states, the District of Columbia, and Puerto Rico.

Utah is an exception though, with a lower BAC limit of 0.05%.

However, even a small amount of alcohol can affect driving ability. In 2018, there were 1,878 people killed in alcohol-related crashes where drivers had BAC levels of only 0.01%-0.07%.

This just proves that regardless of how much you drink, riding will always be risky as long as you have alcohol in your body.

What are the dangers of drunk driving?

Excessive amounts of alcohol in the body can have varying effects, but one thing is certain: it puts any motorcycle rider at risk of being involved in an accident.

Riding a motorcycle requires the ability to concentrate, make good judgments, and quickly react to potential road hazards. However, alcohol lessens these abilities thereby putting yourself and others in danger.

So next time you are tempted to go all-out in a drinking session, keep these dangers in mind:

Alcohol slows your response time which can increase the likelihood of an accident. So if the car in front of you suddenly stops or someone crosses the street, it will take you long to process the situation and realize that you are about to endanger another person.

Alcohol affects motor skills, and without proper coordination, you may not be able to prevent a dangerous situation until it is too late. You would know that your coordination skills are messed up once you start swaying and have trouble walking or standing.

Riding a motorcycle requires undivided attention, especially when trying to stay in your lane, being conscious about your speed, and being aware of your surroundings. However, with alcohol in the body, your attention span reduces, and the chances of an accident increases.

Excessive alcohol consumption negatively impacts your vision. After drinking, your vision blurs and you cannot control your eye movement. This can make you miscalculate the distance between your motorcycle and other vehicles on the road. Moreover, fewer objects may be visible within your peripheral vision which can prevent you from seeing other people, cars, or potential road hazards.

While riding a motorcycle, you need to be able to foresee potential problems and make clear decisions about certain situations on the road. This is because your judgment helps you stay alert and aware of your surroundings while riding. However, having excessive amounts of alcohol in the body will prevent you from making any sound judgments.

A BAC level of 0.08% is already considered legally impaired. However, alcohol can start to have significant effects on your senses after only one drink.

This is how alcohol deteriorates the body and affects riding skills depending on the BAC level:

Who is most at risk?

The people who are most at risk of getting involved in a motorcycle accident while drunk are those who binge drink and suffer from alcoholism. These are people who consume large amounts of alcohol within a short period which can make the negative effects even more harmful.

Motorcycle riders who are between 16-20 years old are also at risk. Young people who belong to this age group are ten times more likely to be involved in a fatal crash than riders over the age of 21. This is because underage drinking is becoming more common and the younger demographic tends to be more reckless.

However, motorcycle riders over the age of 21 are not exactly better riders than those who are younger than them. In 2012, a big percentage of riders who were involved in fatal motorcycle accidents are aged 21-24 years old, with BAC levels of 0.08%-32%. Most of them are college students and young professionals who were binge drinking at parties and other social events with easy access to alcohol.

Is drunk driving punishable by law?

The short answer is yes.

Federal regulation defines a DUI as driving with a BAC level of 0.08% and involves most types of vehicles such as cars, motorcycles, trucks, bicycles, and even golf carts, snowmobiles, and jet skis. However, laws vary in each state so DUI convictions such as fines, jail time, and revocation or suspension of the rider’s license will depend on where the drunk-driving accident occurred.

Some states may also require community service or alcoholism treatment depending on the legal charges.

What do motorcycle helmet laws do and how effective are they?