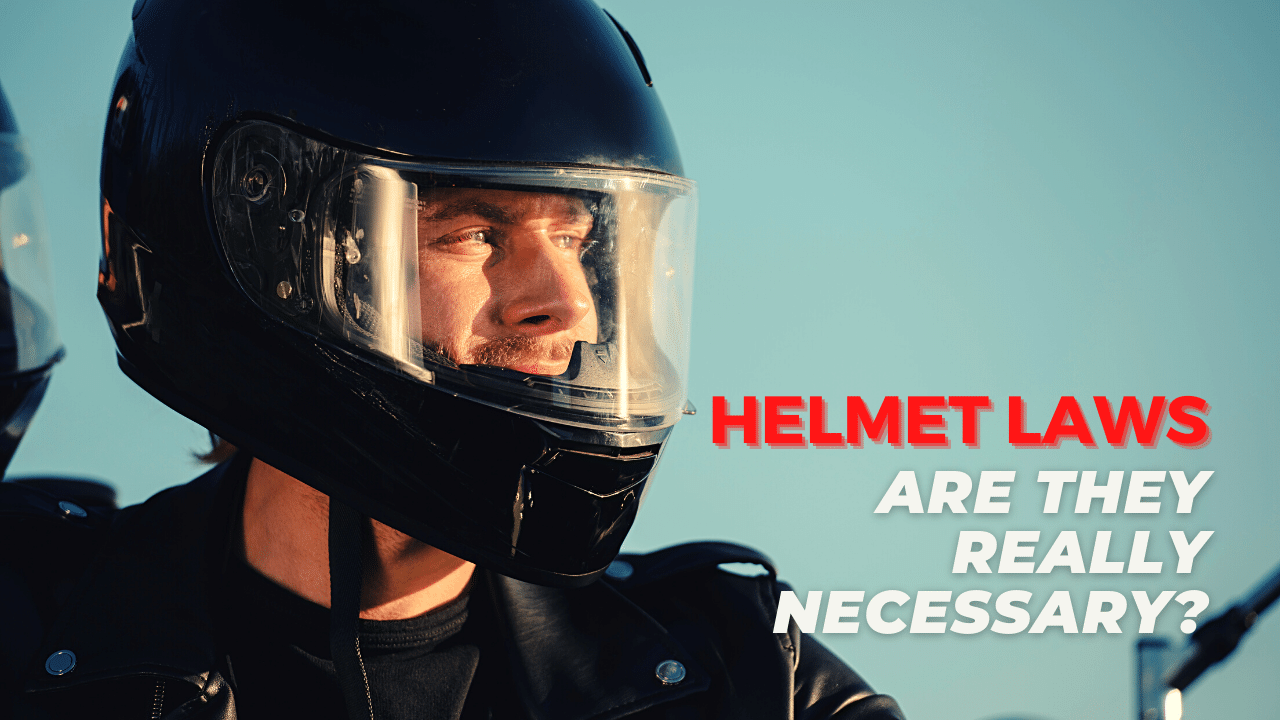 Motorcycle helmet laws vary from state to state and this can make riding a motorcycle across state lines quite a hassle. Not everyone would be aware of what is legal and not in each state, so if a rider not wearing a helmet crosses a state with helmet laws in place, chances are the rider would be committing an expensive violation.

To avoid such inconvenience during a ride, it is best to wear a helmet at all times. Not only will it ensure safety, but a rider will also not have to worry about the laws changing from state to state.

Out of all the states, only three do not have motorcycle helmet laws in place. The rest of the states have legislation in place to mandate the use of helmets. These are:

Illinois does not require motorcycle riders and passengers to wear helmets. However, the state requires them to have eye protection such as glasses, goggles, or a transparent shield.

Under Illinois law, “glasses” refer to eyewear made of shatter-resistant material; “goggles” refer to eye protection that also protects the sides of the head without compromising peripheral vision; while a “transparent shield” refers to a windshield made of shatter-resistant material installed at the front of the motorcycle that extends above the eyes when the rider is seated in an upright riding position.

Iowa had repealed its mandatory motorcycle helmet law in 1976, but as of 2013, there is proposed legislation to reinstate it.

New Hampshire does not implement any helmet law since the National Highway System Designation Act was passed in 1995, but riders under the age of 18 are still required to wear helmets.

From a public safety perspective, helmet laws are effective in lowering overall fatality rates and the likelihood of head injuries, fatal or otherwise.

Several reports from the National Highway Traffic Safety Administration (NHTSA) reveal that the rate of helmet use in states where motorcycle helmet laws have been repealed has dropped significantly.

Additionally, the NHTSA reports also indicated that in states that require only minors to wear helmets, less than 40% of underage riders who were fatally injured wore a helmet. This means that despite a law requiring helmets, it is difficult to determine whether a rider is a minor, thereby hindering enforcement of the law.

As a result of these drops in compliance rates, the number of riders who were killed and sustained traumatic brain injuries increased. A year after they repealed their existing universal helmet laws, the fatality rates of Arkansas and Louisiana increased by 21% and more than 100% respectively. Following this, Louisiana decided to reenact its universal helmet law.

Not only did helmet laws affect injury and fatality rates, but they also affected health care costs for riders and the general public. This is because injured riders often use shared health care and insurance resources, and uninsured riders often rely on public assistance programs to pay for their medical expenses.

Given its proven efficacy, one would think that there is no arguing the use of motorcycle helmets. However, the debate about whether its use should be mandatory or not has been going on for ages.

One side argues that federal law should require motorcycle riders to wear helmets at all times when riding while the other insists that the decision to wear a helmet is solely the rider’s decision.

Those who are against helmet laws also argue that making helmet use mandatory is the federal government’s attempt at controlling an area that should otherwise be at the discretion of each state. On the other hand, those who are for helmet laws believe that such legislation saves lives, reduces the risk of injuries, and helps curb motorcycle theft.

The beginning of helmet laws

However, the states pressured Congress to revoke the federal authority to penalize those who refuse to implement helmet laws. In 1976, Congress eventually gave in, and shortly after, several states relaxed their helmet laws.

In another attempt to entice states, Congress passed the Intermodal Surface Transportation Efficiency Act in 1991 which provided incentives to states that will pass helmet laws. Four years later though, Congress reversed their decision again by lifting federal sanctions against states without helmet laws.

For people who support mandatory helmet use, the statistics do not lie. They believe that helmets do save lives and riders are likely to use them when states enact laws requiring them.

Many studies support this belief as well. According to the NHTSA, helmets reduce the likelihood of a rider getting killed in an accident by 29%. The Hurt Study also corroborates the NHTSA’s findings, revealing that riders wearing helmets are at a much lower risk for all types of neck and head injuries.

Pro-helmet law advocates also maintain that such legislation can also reduce the number of motorcycle theft incidents. This is because motorcycle thieves will fail to bring a helmet when they steal a motorcycle, so if a helmet law is in place, the police can easily determine the thief because of that person’s lack of protective headgear.

Lastly, helmet law advocates also assert that most developed countries are already implementing mandatory helmet laws. They argue that if other countries consider it necessary to have helmet laws to protect their citizens, the US should too.

For people who are against helmet laws, however, the government will only undermine each state’s rights if this mandatory legislation is passed.

The American Motorcyclist Association (AMA), another organization that advocates for motorcycle riders, is also against mandatory helmet use. This organization supports helmet laws aimed at underage riders because they agree that riders belonging to the younger demographic lack the needed maturity to make a proper decision about helmet use.

However, despite encouraging helmet use for all motorcycle riders, the AMA is vehemently opposed to legislation requiring helmets. According to them, the decision to wear a helmet is up to the individual rider alone.

For many opponents of the proposed helmet law, simply wearing a helmet while riding a motorcycle is an unnecessary and insufficient way of ensuring rider safety.  Instead, they believe that riders should educate themselves about safe riding practices and avoid dangerous situations altogether.

Can you get PTSD from a motorcycle accident?

What are the statistics of motorcycle accidents in Maryland?